It has been reported that Southampton striker Jay Rodriguez is set to be out for up to six months after rupturing his anterior cruciate ligament. 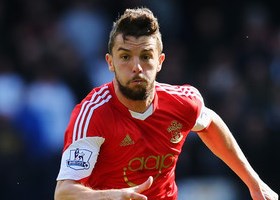 The 24-year old landed awkwardly during Saturday’s 4-1 loss at Manchester City which forced him off the Etihad Stadium pitch on a stretcher.

Scans have since shown that Rodriguez has sustained a serious injury to his knee and will now miss the 2014 World Cup.

Rodriguez is the joint-second-highest scoring Englishman in the Premier League on 15 goals, behind Liverpool’s Daniel Sturridge (20) and equal with Manchester United’s Wayne Rooney, and was a chance of making Roy Hodgson’s Three Lions roster for Brazil after debuting in a friendly against Chile in November.

“Jay is naturally disappointed, but is determined to get back playing for Saints as soon as possible,” club director Les Reed told Southampton’s official website.

“Everything will be done to return him to full fitness and deliver a speedy recovery.

“Jay has asked us to pass on his gratitude to everybody who has shown him their concern and sympathy during the 48-or-so hours since his injury.

“Everyone at the Club now wishes Jay well and we will support him, along with his family, to ensure that an international career plays a big part in his future.” PREMIER LEAGUE TRANSFERS So Far – As At End Of Monday, June 22