Reports are out claiming that Arsenal boss Arsene Wenger was delighted with Jeff Rene-Adelaide’s debut in victory over Lyon. 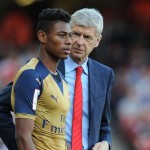 The 17-year-old winger impressed with a mature display off the bench, and caught the eye alongside a host of other youngsters.

“Rene-Adelaide is something special you know,” Wenger told Arsenal Player.

“He is a great talent and when he came on you could see that – 17 years old let’s not forget that. In fact I don’t remember how I played at 17 but I didn’t play like that!”