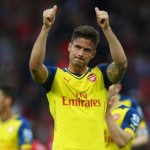 It has been reported that Olivier Giroud has revealed the three Arsenal players who can eat the most.

With the season just about done and dusted, the players can finally look forward to a holiday following an unforgiving nine months of seemingly endless number of matches.

While the rest is well-deserved, some players have the tendency to go overboard and return overweight for pre-season, giving their respective managers a headache.

Arsenal striker Giroud has now revealed that he is one of those players who loves to eat and also added that teammates Carl Jenkinson and Mathieu Flamini are heavy eaters as well.

In an interview with talkSPORT, Giroud said: “To be honest, with my body, because I am tall and quite heavy, I am one of the players who eats the most.

“I remember last year when I was so surprised by how much Carl Jenkinson could put in his stomach. Mathieu Flamini as well. He’s got a little body but he eats so much, it’s crazy.” Arsenal To Send Isaac Hayden On Loan To Hull City