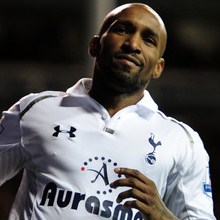 Reports are out claiming that Jermain Defoe has made it vehemently clear that he is happy at Tottenham.

The 30-year old England international striker is being heavily linked with a move to QPR to reunite with former Spurs boss Harry Redknapp but has declared that he has no intentions of leaving White Hart Lane before his playing days are over.

Defoe told Sky Sports News : “That’s not going to happen. I’m not leaving Tottenham, I love the club and to score goals at a big club like this is fantastic,”.

“If the opportunity comes to leave the club it won’t be happening. I don’t want to leave, I’m a Spurs player – and I’m happy. I’d like to finish my career at Tottenham. I want to achieve something special here – it’s a great time to be at the club.”