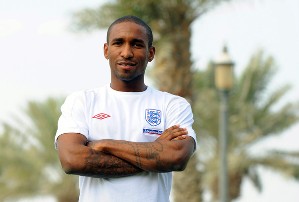 Tottenham striker Jermain Defoe has declared that he is ready to bring his best to the fore for his nation.

The 27-year old striker has been overlooked by England for recent tournaments but after some consistent form in the past two seasons is sure to be included in Fabio Capello’s squad for the World Cup in South Africa.

Defoe is adamant that if he is there, he will perform at the highest level and make the most of the opportunity.

Defoe told reporters that : “That disappointment has focused my mind more,”.

“Everything happens for a reason. For some reason I wasn’t meant to play in the last World Cup or Euro 2004.

“This time I’ve been determined to make sure I get on the plane and put things right.

“I am a very different Jermain Defoe compared to four years ago. Sometimes, when you get disappointments, it makes you stronger.

“Maybe if I had gone last time I would have got complacent and been thinking ‘I’ve been before’ and lost that hunger.

“But even at the beginning of the season, in pre-season, I was looking forward to this, making sure I got my mind right. I was just trying to give myself the best opportunity.”