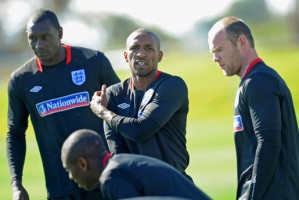 Interesting news are out and it has been reported that Tottenham striker Jermain Defoe may be thrown into the World Cup fold against Algeria on Friday.

It is said that England boss Fabio Capello has admitted that he may make a change or two for the second group stage match following the 1-1 draw with the USA and has revealed that Defoe may come in to replace Emile Heskey.

He also stated that he had not yet made up his mind on who will take the gloves after Robert Green’s howler that gifted USA their equaliser.

“I have to decide about two positions. The goalkeeper and the next forward. Heskey or Defoe,” he said.

“Green made a big mistake but in the second half he played well.”