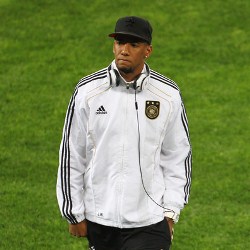 Manchester City defender Jerome Boateng is on the verge of joining Bayern Munich on a four-year contract.

The Germany international defender failed to make an impression in his only season with City, a campaign which was dogged by injury and a struggle for form.

It is said that the Eastlands club and Bayern have yet to agree a fee for the player, but it now seems certain he will be back in the Bundesliga 12 months after leaving Hamburg for Eastlands.

Boateng told kicker : “It is true that I have agreed with Bayern on a four-year deal. Now it is up to Manchester to make it work. At the moment they are making things a bit difficult,”.

“It is about the position. Bayern want me as a central defender. That is also an advantage for the national team.

“My dream is to have a starting spot within a year, hopefully at Bayern, and then I want to win the European Championship.”