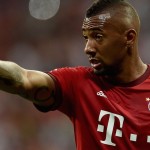 It has been revealed that Bayern Munich defender Jerome Boateng has hit out at Manchester United over their pursuit of teammate Thomas Muller.

United are expected to offer €85 million for Muller this week.

Former Manchester City defender Boateng slammed: “What’s happening there is madness, but money has so far not won any titles.”

Boateng’s former club City, meanwhile, are also reported to be closing in on Wolfsburg attacker Kevin De Bruyne for around £50m.

REVEALED : Arsenal Most Valuable London Team, Worth More Than £1Billion