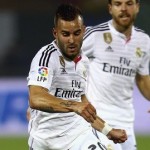 Reports have emerged claiming that Real Madrid attacker Jese Rodriguez had mixed emotions after starting in their friendly defeat to AC Milan.

It was the 21 year old’s first start for the season after fully recovering from knee surgery.

“Real Madrid always have to win every game they play and that is why we are not satisfied with the failure to win, but the team are working well, and now we have another game in La Liga where things are going well for us. We have to keep going like that,” said the striker.

“I have recovered now and the important thing is to help the team. I have had seven days of holidays and have been training with my physiotherapist, who continues to treat the muscles on my knee. That is the most important thing and we are working on it.

“I want to win titles in the coming year. The team has to fight for all of the titles being played for. That is the aim of the team mates as well my own aim.” Real Madrid WILL Sell Karim Benzema To Arsenal – For £45M!