It has been reported that Manchester United midfielder Jesse Lingard was delighted to score in their victory over Barcelona. 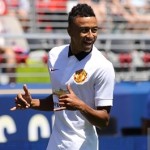 Lingard stepped off the bench on 62 minutes and bagged a goal just three minutes later.

Asked to recount his second-half goal, Jesse continued: “Andreas did well to get it in midfield. He’s played it out to Wilson and then Willo’s committed the defender. Tyler Blackett’s pulled it back and it was lucky that I was there, on the edge of the box, and I’ve stuck it home.

“I’ve wanted to add goals to my game since last season. I scored a couple of goals while I was on loan for Derby County [last season] and it’s good to get off the mark again now.” Arsene Wenger In Contact With Alexis Sanchez Agent In Brazil