Transfer news from the La Liga is out claiming that Joao Miranda is ready to stay with Atletico Madrid. 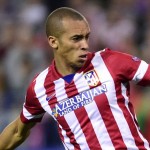 According to reports from Marca, the 29-year-old central defender is willing report for what will be his fourth pre-season with Atletico.

The Brazil defender had been keen on a move away, with Manchester United and Barcelona interested.

However Miranda has a €30 million release clause and the ‘Rojiblancos’ have made it plain that this sum is what it would take to prise the defender away.