Reports are out claiming that Liverpool midfielder Joe Allen has admitted that his future at Anfield is far from certain. 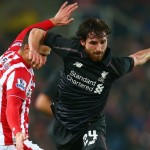 The 25-year-old Wales international has revealed that contract talks, which started in March, have gone quiet recently.

Allen’s current deal with the club expires in 2017 and he is well aware he needs to force his way into Jurgen Klopp’s team on a regular basis to ensure he has a future on Merseyside.

“That is something which has gone very quiet so I am not too sure really,” he said of the contract talks.

“I have made only one league start this season and I want to play more, I think that is obvious for any player in that situation.

“From my point of view it is about knuckling down, doing my job and giving my best, which I always do.”