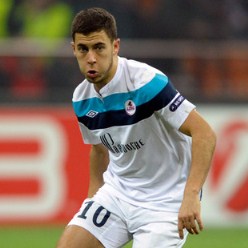 Cole is on-loan at Lille from Liverpool and isn’t surprised to hear the Reds, Chelsea and Arsenal are chasing the Belgian.

He told talkSPORT: “Hazard is different class. He’s still only 21 and has definitely got another few gears to go up. He’s got the same attitude as Rooney at that age – he’s fearless.

“He knows how good he is, and that’s a positive. All the top players have got that belief and a bit of presence and arrogance, and he’s like that.

“He’s a bit like Messi. There’s only one Messi and I don’t want to put pressure on the kid, but he’s like him – short, squat, powerful legs, great touch, he can finish, he’s got everything.”