It has been reported that Manchester City goalkeeper Joe Hart has praised teammate Nicolas Otamendi for his rock solid performance in Sunday’s scoreless draw with Manchester United. 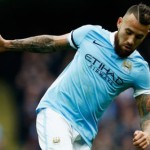 The Argentine international played a key role in marshalling the backline in front of Hart and ensuring the Citizens kept a clean sheet while their attack faltered.

“Nico has come in and adapted very quickly which is something we expected,” Hart said, as quoted by Sky Sports.

“But respect to him because it’s not an easy league to come into.

“He had a tussle with Wayne Rooney all afternoon and Anthony Martial out on the wing. It was a big occasion for him but he slipped in alongside Vincent Kompany and played really well – we’re blessed to have so many good centre halves at this club and Nico is definitely one of them.”