It has been reported that Manchester City goalkeeper Joe Hart has made it vehemently clear that the reigning Premier League champions will not give up on their title defence. 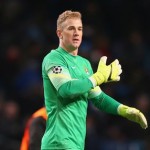 Critics are beginning to write off Manuel Pellegrini’s side after falling six points behind league leaders and hot favourites Chelsea but Hart says there is not one thought within the City playing group that they cannot fight tooth and nail to bridge the gap.

“I will never give up, ever, and I could safely say that nobody in our dressing room will ever give up either. We will see where that takes us,” said Hart ahead of Saturday’s home clash with West Bromwich Albion.

“West Brom is a huge game and we turn our focus to that. We have no excuse not to throw everything at the Premier League now and give our all – to the fans, the owner, to everyone.

“Every game is a must-win now. We have no time to lick our wounds, we have to fly into that game.

“We have to win every game, and that is how we will go into it, and see where it takes us.

“We have had a few knocks this season, but we have proved it time and time again, and so have our fans, that we come back and we keep fighting.”