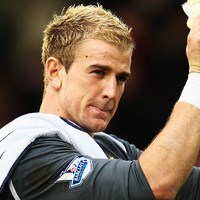 Joe Hart has declared that tomorrow night’s Euro2012 qualifier against Montenegro is the biggest game of his international career.

The Three Lions are just one point from qualifying for the Poland and Ukraine tournament and Hart is looking forward to securing their berth in the championships with the right result in Podgorica.

The Manchester City goalkeeper told the England team’s official website : “I’ve never played a game as key as this one is going to be for my country,”.

“With the Under-21s it was key to get into the tournaments, the play-off matches, but this is another level isn’t it?

“It’s a big game and we have a lot of experienced players, we’ve all played big games before and we’ll bring that experience.

“At the end of day it’s 90 minutes of football and we’re playing well as a unit, so we’ll just bring that into Friday.”

And Hart added that tomorrow night is more about getting the point required rather than playing an attractive brand of football.

“I think from day one it’s about that,” he added.

“Obviously it’s nice to play well, and we want to play well at Wembley and entertain the fans because they turn out in great numbers.

“But the ultimate goal is to get to the championship and we’re doing the right things at the moment to do that. It’s the result that matters.”