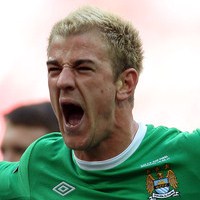 It has been revealed that Joe Hart is still coming to terms with being number one keeper at Manchester City ahead of Shay Given.

The England international star has enjoyed a fantastic season for the Eastlands club breaking Nicky Weaver’s record of 26 clean sheets in a season with 28 to date before the final game of the campaign.

The 24 year old admitted that the competition from Given and Stuart Taylor keeps him on his toes.

Hart told Sky Sports News : “With the two goalkeepers at our place – Stuart Taylor who is a great goalkeeper and obviously Shay Given, who I still can’t believe that I manage to get a game ahead of at the moment – it keeps me on my toes and I realise I have to play well week-in, week-out,”.

Hart was also quick to admit that the defenders in front of him deserve a lot of the credit for City’s success this term.

“Between it all I wasn’t happy with one of my performances recently so I wouldn’t say I am in the form of my life, but I am getting some consistency and we are defending well as a team.”