Reports are out claiming that Joe Hart was back in training on Thursday ahead of Manchester City’s clash with Stoke City this weekend. 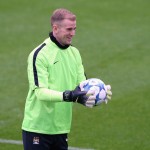 The England international goalkeeper has missed City’s past two matches with a hamstring strain but has recovered and is set to take the gloves from Willy Caballero.

Hart trained without restriction and is expected to be back on goals for City when they head to the Britannia Stadium on Saturday.

The 28-year-old was subbed off late in the 1-0 Champions League loss to Juventus last week, forcing him out of last weekend’s 3-1 win over Southampton and Tuesday’s 4-1 triumph over Hull City in the Capital One Cup quarter-final, but appears in good order to reclaim his spot in Manuel Pellegrini’s starting line-up.