Joe Hart : We Went For The Kill Against Manchester United! 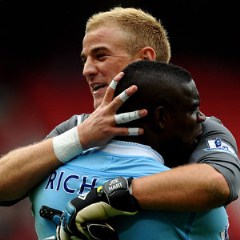 The Eastlands club ran rampant to win 6-1 at Old Trafford.

England keeper Hart said: “It was as good as it looked. The fans felt amazing, the lads felt amazing. There was a real feel-good vibe about it.

“It’s magnificent football we’ve been playing all year. We have got top-quality players and we have proved that.

“United were bleeding when they had a man sent off and we went in for the kill.”

Mario Balotelli Explains Reason Behind ‘Why Always Me’ T-Shirt


Guardiola : Man Utd Still One Of The Best Team In The World!