Joel Campbell is confident that Olympiakos is capable of beating their more-fancied opponents in Manchester United on Tuesday night. 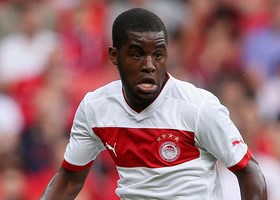 The Greek SuperLeague champions host the reigning Premier League winners in Athens in the Champions League Round of 16 first leg and Costa Rican striker Campbell, who is on loan from Arsenal, is gunning for the Red Devils.

“Manchester United are a historic team, even as a boy growing up in Costa Rica it was a famous team, but we have a strong team.”

Campbell has scored nine goals for Olympiakos since arriving from the Emirates Stadium in the summer and he insists his time spent in Greece has certainly helped him develop as a player.

“This has been a very good experience,” he added.

“I am trying to do my best, to do better and continue growing as a footballer. It is why I chose Olympiakos.

“This is a big team with the opportunity to play in the Champions League, the most important competition in Europe.

“The league here is not as competitive as in Spain but it is a good place for me to grow as a player. We have a strong team, with competition for places.

“Every day I try to learn something from Javi Saviola. The life here is good, the food and the weather.” Tomasz Kuszczak : I Want To Be No.1 At Manchester United