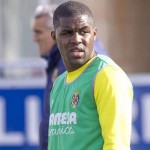 Reports are out claiming that Joel Campbell expects a future with Arsenal.

The Costa Rica international striker is currently playing on-loan with Villarreal, where it’s been suggested he could sign permanently this summer.

However Campbell says he still sees his future with the Gunners.

“I extended with Arsenal. But in football, you never know where you can play.

“I will go on vacation and return to Arsenal because I am paid by them,” he clarified with RMC.