It has been reported that Arsenal striker Joel Campbell has no problem battling for his place. 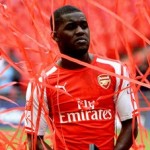 The 22 year old said he will fight hard to show his own qualities when he gets his chance in the first team.

The Costa Rica international told Arsenal Player: “I presume that every attacking player in the squad will fight with me for a starting place. But I am my biggest competitor – I have to train hard and get better day after day. Being here is a great opportunity for me.

“I feel that I can contribute with speed, goals and dribbling skills. I am a player capable of playing either on the right or left flanks or in the middle.

“It’s down to the manager to decide which of those three positions I am needed most in. I just have to do my best anywhere I play.”