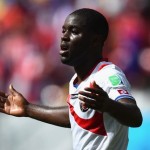 Wanchope believes Campbell’s striking World Cup performances have been fired by frustration at being unable to show Arsenal and England what he is capable of.

“He really wants to go back to Arsenal,” said Wanchope.

“I’ve told him that the only way to do that is on the pitch and I think he’ll do it.”

Campbell’s Umberto father also says: “I’ve told him the game against England has to be the game for him now.

“He has the football to show in England and this is the time for him to prove it to everybody.

“I knew he was going to score or do something exceptional like he did for the third goal against Uruguay. I am expecting the same again.”