It has been reported that Johan Cruyff told Sky Sports News that Louis van Gaal is playing the wrong style of football at Manchester United and has criticised the behaviour of Jose Mourinho. 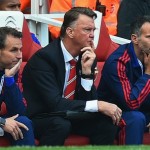 Asked if he thought Van Gaal was too cautious, he said: “I don’t think so, but it’s strange that against strong teams they’ve got good results and with weak teams they’ve had difficulties. That’s a strange situation.

“But the results I think are second. The game is first. Money is very important but always second. In England they play different, everybody has their own style. A mix of styles is always good.

“The most important part are the fans, that people going home are happy. It’s their time off and you should give them something to enjoy.”

Cruyff also believes the fact Jose Mourinho was not a player is a factor in the Chelsea boss’ behaviour, adding the former Real Madrid head coach is setting a bad example to children.

“He’s controversial. What I like about him is he’s always capable of creating good ambience within the players and what I don’t like is that he always puts himself on the first row. He should be on the second row.

“He should behave better because he will be in the press all over the world.”