It has been revealed that Dutch legend Johan Cruyff has praised Manchester United for standing by manager David Moyes. 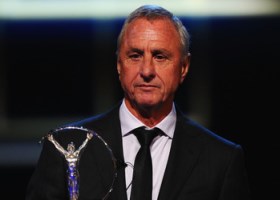 The 66 year old feels both United and PSV Eindhoven, with Philip Cocu, are right to be patient with their managerial appointments this season.

“Both coaches have been appointed as the club wanted something else,” Cruyff wrote in his column in De Telegraaf.

“It is essential that this vision at all levels is followed, not that there are people who say they support it, but do not do that in the execution.

“The first team needs to perform as soon as possible in such a process and so the overall club policy should be supportive of him.

“In almost all cases, you see that the problems arise where this is not committed to properly.”