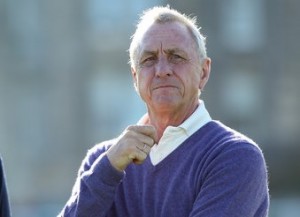 It has been reported that Barcelona legend Johan Cruyff has slammed their approach to Celta Vigo coach Luis Enrique.

The Spanish giant’s move for Luis Enrique became a media circus last week as details of their meetings were made public.

Cruyff rapped: “It is unethical to meet Luis Enrique in public with the Liga at stake and a Celta-Real Madrid game in sight.

“I don’t know what Barça’s project is. We’ll have to see if Luis Enrique’s ideas match the clubs’.”