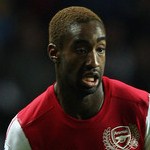 Arsenal defender Johan Djourou says they must prove themselves London’s top dogs with victory over Tottenham.

The Swiss defender accepts that Spurs have done well this season but believes the two clubs’ respective league positions will be irrelevant once the match begins.

“When you play them, you forget the table; it is a battle and the best team will win,” Djourou told Arsenal.com.

“They are in great shape this season, they have been playing a lot better than before but you have to forget about that and go to war.

“They have a lot of quality, we shouldn’t be blind about that. They have players like Modric, Parker, Adebayor and Bale so it’s a good team.

“When you play well you gain a lot of confidence. At the start of the season some people wrote them off because they lost a few games but since then they have been unbelievable. But it is up to us to show that we are the kings of London.”