It has been reported that Chelsea midfielder John Obi Mikel has accused Arsenal striker Olivier Giroud of elbowing him. 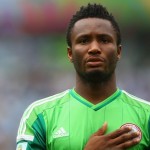 France saw off Obi Mikel’s Nigeria in yesterday’s World Cup round of 16 clash.

Obi Mikel said: “Yes I got an elbow and the referee saw it and he only gave him a warning, not even a yellow card, nothing. It was bad.

“We know the game – if you see it, act on it. The ref saw it. He did catch me, I don’t know if it was too hard but the intention was definitely there.

“I don’t think he is a dirty player. Everyone wants to win for his country. He hasn’t done those sort of things before so maybe it was just one of those things in the heat of the moment.

“I thought the referee didn’t help us. There were some heavy challenges and I think Onazi has broken his ankle. Challenges like this are bad but it was a 50-50, he just miscalculated, he is not a dirty player.

“We played so well and we were the better side until we let in a goal. We conceded from two set-pieces after we had talked a lot on set-pieces. We were organised until then but we knew the little slip up could be a set-piece.”