Norwich City goalkeeper John Ruddy has pledged his future to the Canaries despite their relegation to the Championship. 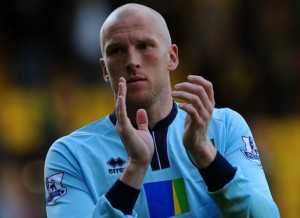 The 27 year old England international told the Norwich Evening News : “I’m not a quitter, definitely not,”.

“I signed a new contract with Norwich in October. I’ve got three seasons left on that contract.”

Ruddy admits that he was linked with Chelsea last summer, but again he paid little attention to it.

“The situation is the same as it was last summer. There was a bit of interest from Chelsea, but Norwich didn’t receive a bid they deemed acceptable,” he said.

“If that’s the same case this summer then I’ve no problem with that. I’m very happy at Norwich. My family are very settled.

“Unless the club turn around to me and say we’ve accepted an offer for you, then I’ll be a Norwich player come next season. Norwich fans are fantastic.

“They’ve been very good with me. I had a tough time when I first joined here and they could easily have turned against me but they stuck by me, and I would like to think I have repaid their faith.”