Reports are out claiming that Chelsea skipper John Terry loves the idea of the Premier League returning to Stamford Bridge. 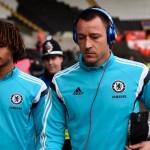 Chelsea are now well clear at the top of the table.

Terry told Chelsea magazine: “Winning the league is the best feeling and, as someone who has been here a long time, seeing other teams win the league really hurts all summer. You go on your holidays and everyone thinks you get away from it, but you don’t.

“If we don’t win it, nine times out of 10 we are there or thereabouts and we work so hard throughout the season. It is the best title to go and win, domestically, and it would be a statement as well, after making some big signings this season, to then go on and win it and kick on after that.” Premier League Transfers So Far – As At Wednesday, July 15