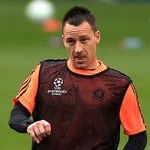 Chelsea thrashed Spurs 5-1, though not without controversy.

“It was a great performance and a great result and some excellent goals as well from Lamps and Didier, and there was great movement as well,” declared Terry.

“I thought we were the better side. Tottenham had a good spell in the first half but we soaked that up.”