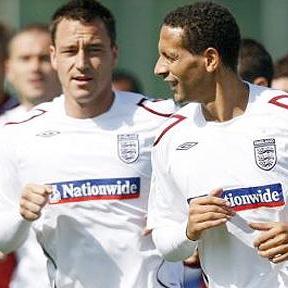 The 30 year old central defender admitted to The Sun: “I’ve been luckier than Rio with injuries of late and I’m frustrated for him.

“Frank Lampard went 10 years without any injuries, then this year he had a difficult one and people jumped on that.

“The hardest thing for players to accept is when people jump on an injury and say ‘Oh, it’s because they’re old… they’ve hit 30, 32’. It’s ridiculous.

“We’re playing at 100 miles-per-hour and even in training you pick up little niggles.

“Thankfully, I don’t pick up many injuries and if I do I seem to recover quickly.

“You go through spells where you pick up injuries and then a couple of years where you have nothing at all.

“A few of us went to Rio’s room at the World Cup after he did his knee. He was frustrated and there was nothing anyone could say to make him feel better.

“But he was still encouraging us and wanted us to go all the way. That’s how Rio is, he always thinks about the team and his team-mates.”