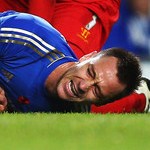 The distraught Blues captain was due to undergo an MRI scan after leaving Stamford Bridge on crutches and with a brace on his right knee following Sunday’s 1-1 Barclays Premier League draw with Liverpool.

Terry was left writhing in distress 10 minutes before half-time after Luis Suarez fell on his leg following an accidental collision between the pair.

Following almost five minutes’ treatment, he was carried off on a stretcher with his head in his hands and was attended to by club medics before being allowed home.

Sunday’s match was the 31-year-old’s first domestic appearance since his four-match racism ban.

Rocky Baptiste – The Miss Of The Century