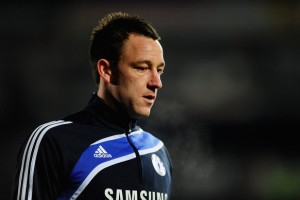 Interesting news are out and it has been reported that Chelsea captain John Terry was not at training yesterday.

Local newspapers have reported that John Terry missed training on Monday to receive treatment on a dead-leg he suffered against Arsenal but he expects to train on Tuesday.

Manager Carlo Ancelotti has promised his captain compassionate leave if he needs it to deal with his personal problems and is expected to give him a break by resting him from Saturday’s FA Cup fifth round tie at home to Cardiff.