Reports are out claiming that Chelsea have confirmed that John Terry has signed a new contract with the club. 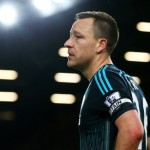 The centre-back, 34, has penned a one-year extension on his existing deal which will see him remain at Stamford Bridge until the summer of 2016.

?Terry, who has amassed 661 appearances for the Blues since 1998, admitted it was a great feeling knowing that his beloved Chelsea still see him as a key player after leading the west London club to this season’s Capital One Cup.

?“I’m delighted to have signed an extension to my contract with Chelsea,” he told the club’s official website.

?“After adding another major trophy to my collection this month I hope myself, the players and manager can continue to bring success to our club.

?“Playing for this great club makes me so proud. And as always I would like to thank the fans who have continually supported me.”

Chelsea and Real Madrid do battle for Roma defender Juan