It has been reported that John Terry is remaining calm with Chelsea’s fine start to the Premier League season. 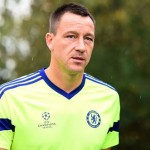 The Blues have taken a five-point lead over Manchester City into the international break after Sunday’s 2-0 win over Arsenal, their sixth victory from seven games.

“Clearly it (the title race) is not over,” Terry said.

“Other teams have been in this position. It’s nice to have the lead but when you’re at the top everyone wants to shoot you down.

“That’s the good thing about the Premier League and why everyone loves it.

“Teams are out to get us because we are at the top and playing well.

“The international break is here and we need to come back and maintain our form after that as well. It’s very important we do that.”

He added: “You’re just hoping when you’re at the top and have a five-point cushion and more on certain teams, a couple of them slip up again and that increases.

“If that happens, it’s a lot of points to give up early on. All we can do is keep winning and wait for those teams to slip up.”