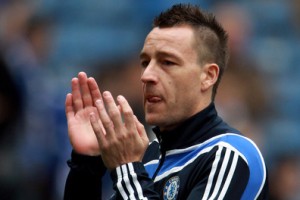 Chelsea captain John Terry is intent on inflicting revenge on Manchester United when the top two clubs in England meet at Old Trafford on Saturday.

Last season the Blues went down 3-0 to the Red Devils at the famous ground but Terry is determined to bounce back from that result and pick up three points to go towards their title pursuit.

Terry told reporters that : “There is so much on this game. The way we have played the last couple of games, we have to take that momentum and that same game plan into this match,”

He also said that : “We have to approach the game with no fear and we must go into it playing our own game.

He ended by saying that : “We go there not only with confidence from the last few games but still hurting from that defeat, and that will spur us on.”