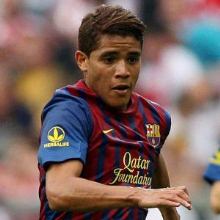 It has been reported that Jonathan dos Santos is digging in his heels at Barcelona.

The 22 year old Mexican international midfielder has offers from rival Primera Division clubs and the Premier League, but wants to prove himself at Barca, says El Mundo Deportivo.

Dos Santos has won more minutes under coach Tito Vilanova in recent weeks and is convinced he can establish himself at Barca this season.