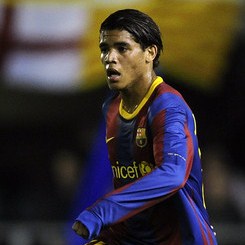 Barcelona midfielder Jonathan dos Santos is in the sights of Blackburn Rovers.

The Daily Mail says the Mexico midfielder, brother of Tottenham’s Giovani, is on the fringes of Barcelona’s first-team squad but is a regular in their B side.

The 21-year-old, son of former Brazil star Zizinho, is in dispute with Barca over a new contract — as with several of their young players, he fears he will not get chances to play at the level he wants.

Barcelona say Rovers scouts have been in attendance at recent B-team games with Dos Santos the focus of their attention.