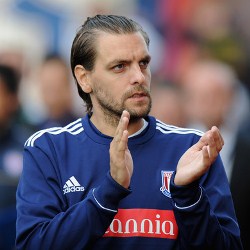 Stoke City defender Jonathan Woodgate has admitted that he is desperate to make up for lost time.

The former Real Madrid and Tottenham centre back is set to start today against Chelsea.

“I feel behind where I should be at this stage in my career,” he said.

“It was good to play that 90 minutes the other day. It gave me a lot of confidence. It has been disappointing in the past with all the games I have missed.

“Hopefully I can kick on now.’’

The defender is also keen to lose his tag as one of football’s leading sick-notes.

“Too much is made of my injuries,” said Woodgate.

“Every time I get a nick, people think that’s me out for the season.

“It’s quite annoying, but I have learned to get over it. It’s life.

“I like proving people wrong. It builds your character when people don’t think you will get back.”