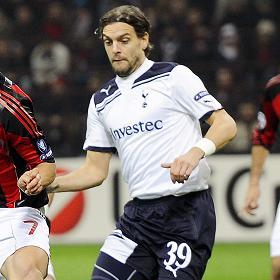 Tottenham Hotspur defender Jonathan Woodgate has picked up a strain to his left adductor muscle during Tuesday’s Champions League victory over AC Milan.

The Central defender was called on as a replacement for the injured Vedran Corluka during Spurs’ 1-0 win in the first leg of their last 16 clash with the Serie A leaders, and seemed afterwards to have come through the experience unscathed – despite a history of injury problems.

However that verdict appears to be premature, as the club confirmed on Wednesday that the player will have to undergo assessment for his latest setback, which could again rule him out for a number of games.

A club statement read : “Jonathan Woodgate has sustained a strain of the left Adductor muscle, a scan has confirmed this evening [Wednesday],”.

“The centre-back … will now be assessed over the coming days.”

After making his first apperance in 15 months at San Siro on Tuesday, Woodgate told reporters after the game that he was delighted to prove he could return to full fitness.

“It was a great feeling to get back,” Woodgate said. “There is nothing worse than when you can’t play football. Watching games is painful when you’re injured but you try to spur the lads on and give them all the confidence they need.

“A lot of people doubted whether I’d be able to get back but you have to show determination to not let bad times get you down and you have to just keep going.”