According to Phil Jones, Manchester United players are right behind teammate Marouane Fellaini. 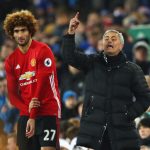 He was booed as he warmed up to come on against Tottenham and the cries of derision from the Manchester United fans grew louder still when he entered the field of play. For many fans his clumsy challenge that conceded a late penalty at Everton and cost United victory the previous weekend was the final straw.

Jones said: “It is disappointing but he is a strong boy. He is mentally strong to cope with that don’t worry. He’s strong enough mentally to deal with it.

“We know what he is good at and he has to carry on. He does a good job for us. He has to put it aside.”