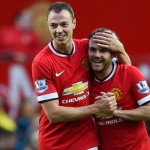 Reports are out claiming that Manchester United defender Jonny Evans insists their patient play is the way to go.

The Premier League giants were held at both Tottenham and Stoke, extending the current unbeaten run to 10 matches, but when asked if the results felt like points dropped, the defender responded positively.

”We have to remain patient though, that’s the main thing. I think in the last few games, the performances have been better and we’ve played with more fluency. We know our roles in the team now and, positionally, we are very organised.

“But we have got to remain patient and hopefully the results will come.”