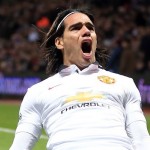 Reports are out claiming that Manchester United defender Jonny Evans was happy for Radamel Falcao after his goal in their draw at Aston Villa.

A key positive at Villa Park was another goal Falcao, who started only his second game in two months. Like all his team-mates, Evans was delighted to see the Colombian striker back among the goals.

“He did very well and got his goal,” Evans said.

“It was a great cross from Youngy and a great header. He’s got a predator instinct in the area. Look at his record over the years, he’s scored lots of headers and one-touch finishes – he has great movement.” Juventus Has No Regrets Missiong Out On Arsenal, Man Utd Target Julian Draxler