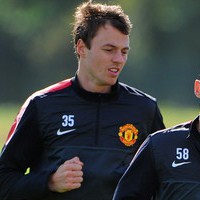 The Spanish international striker was sent off after going down under Evans’ challenge in the second-half of United’s 3-2 win.

“I’ve seen it again and there was a bit of contact but I didn’t feel like it was enough to bring him down. I think he probably realised he wasn’t getting the ball, he’s gone down and I think the referee’s made the right decision and sent him off.”