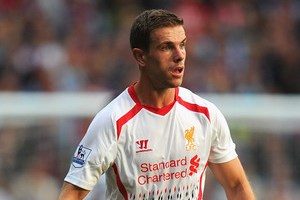 It has been revealed that Liverpool midfielder Jordan Henderson is convinced of their top four chances.

The Reds currently sit at the top of the Premier League table after three games, with Brendan Rodgers’ side boasting the only 100 per cent record in the top flight.

Henderson said: “We have now got a lot of momentum after the first three games of the season. Beating Manchester United at Anfield gave us all a great boost.”