Reports are out claiming that Liverpool captain Jordan Henderson felt they showed great character to win at Stoke City. 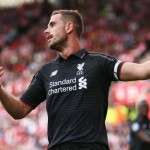 Brazilian international Philippe Coutinho struck four minutes of time with a dipping 30-yard effort to secure a 1-0 win that went some way to avenging the 6-1 humiliation against the Potters on the final day of last season.

“We knew it would be difficult it’s hard place and a good team,” Henderson said.

“But we’ve worked well in pre-season and I think we showed the resilience today before Philippe came up with a bit of magic.

“I was behind the shot. I knew he would make the keeper work, he does that in training everyday so there’s no surprise to us really.

“I always believe we can create chances so I knew we’d get a chance to win the game and thankfully we did.

“It’s one win, one game at the end of the day so we have to keep working hard.”