It has been reported that Jordan Henderson is happy studying the game of Liverpool captain Steven Gerrard up close. 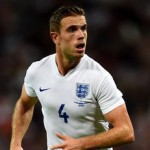 The England international will one day be expected to take over Steven Gerrard’s mantle and ahead of Saturday’s trip to West Ham, the 24-year-old says he could not wish for a better man to be educated by and hailed the skipper’s influence.

“I have learned from players all around me but he has been a massive influence on my career,” said Henderson.

“I’ve got no better man to learn from. Stevie just said congratulations to me. He told me that I had worked hard and deserved it, it meant a lot coming from him. I think it shows how much I have progressed.”