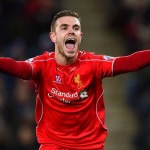 Reports are out claiming that Liverpool midfielder Jordan Henderson doesn’t expect to succeed Steven Gerrard as club captain next season.

The England international is favourite to be named club captain once Gerrard leaves for LA Galaxy.

“That’s up to the manager in the summer,” he said.

“I’m not going to be captain as of yet. It could be anybody else in the team because we’ve got a lot of leaders and a lot of good characters in the team.

“Of course it’d be an honour for me to do that, but when a big player like Stevie leaves, obviously it’s disappointing, but everybody else has got to step up.

“We’ve got a lot of young players in the team and next season, when he isn’t there, it’s time for everybody to show what they’re capable of and show that little bit of extra responsibility.

“And I wouldn’t put that down to whoever is the next captain or one person in his position because for me there will never be another Steven Gerrard.”

Martin Broughton : Gerrard And Torres Will Not Be Sold