Reports are out claiming that Jordan Henderson felt Liverpool were back at their high intensity best for their draw with Arsenal. 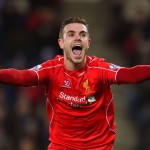 Liverpool enjoyed two-thirds of the possession against a Gunners side famed for their use of the ball and, while they did not take full advantage, Henderson said the players had noticed a difference.

“The overall feeling with everyone is much better,” he said.

“The intensity is there in getting the ball back, pressurising high up the pitch to get it back and the passing and moving forward and penetration was good so hopefully we can carry that on and pick up more points.

“The performance level is getting better and back to the level we know we can play at, with the intensity returning and everyone working to get the ball back and getting forward we are having real penetration behind.

“It has been frustrating at times that we have created so many chances but at the same time it is pleasing our performance levels are much better.

“We just need to back that up with results.”